For those familiar with Visual Studio Database Projects (VSDB), SqlPackage.exe is the replacement for VSDBCMD.exe

Once everything is installed you should be able to find SqlPackage.exe in a location similar to "C:\Program Files (x86)\Microsoft SQL Server\110\DAC\bin."

Below is a basic sample of how to execute SqlPackage.exe.

For an exhaustive list of available parameters see MSDN.

Look familiar? There's a simple solution. We just need to add a reference to the master database. 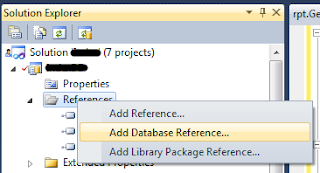 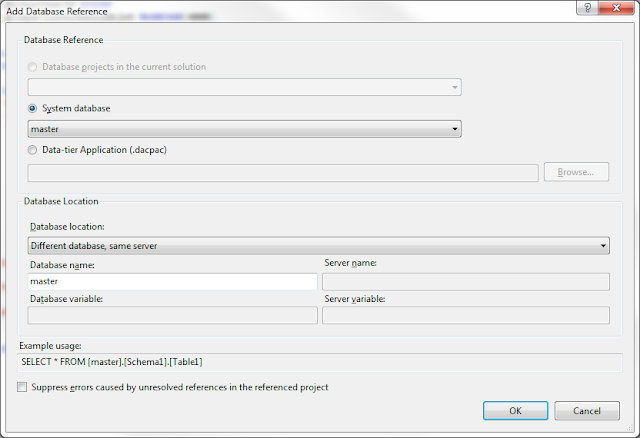 3) Voila. The reference appears under the folder and the warning goes away.

Creating a CLR Function in SSDT

Creating a CLR function in SSDT (SQL Server Data Tools) is not very difficult but if you've never done it before you might be wondering where to start. Here goes...

Enabling CLR
First things first. While not directly related to SSDT it is necessary to enable CLR on your SQL Server instance since whatever code you end up writing won't be able to execute until this is done. All we have to do is set the clr enabled configuration to 1. See below.
SSDT Project Properties
It is necessary to tell your SSDT project which version of the .NET Framework to use. If you're running SQL Server 2008 R2 you can use .NET Framework 3.5 or lower. SQL Server 2012 support .NET Framework 4.0. To get to the screen below, right click your project in the Solution Explorer and select Properties and then click the SQLCLR tab on the left-hand size. Set your Target framework appropriately. 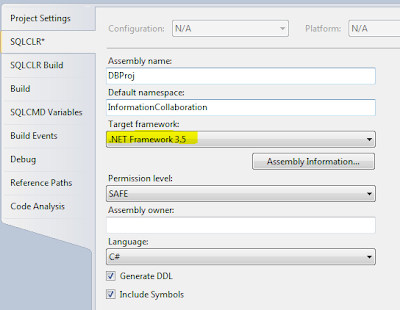 Add a Function to the Project
Right-click within the project and select Add > New Item... 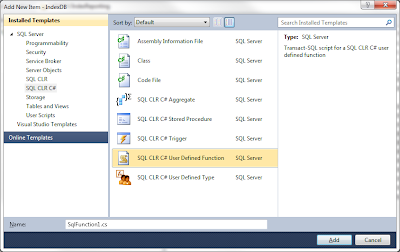 Define the Function
Below is a sample function from MSDN. Obviously you can create a function to do whatever you're trying to accomplish.

Publish
Publish your SSDT project as you normally would.

SSDT makes database development and deployment a breeze but sometimes the approach can be less than intuitive. If you're used to creating CLR objects manually you might have been wondering how to create the assembly and the T-SQL reference to the CLR object's method. SSDT is kind enough to do this work for us.

If you look at Object Explorer you'll see the new assembly (DBProj) and the new dbo.validatePhone function. 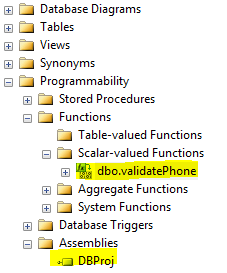 If you further explore the dbo.validatePhone function you'll see that it is a wrapper for your CLR function.

Conclusion
CLR objects can be as complex as the code that you write but SSDT makes their development and deployment easier. Hopefully this post shows you just how easy it is.
Posted by d.elish at 6:39 PM No comments:

I recently stumbled onto what seemed to be an odd performance problem in an SSIS project I was working on. The problem was that I had a number of straightforward packages that ran extremely fast but sometimes, without explanation, ran really slow.

Luckily the project included a robust logging system that provided, among other things, the execution duration of every package and Control Flow task.  The logs showed that the Data Flows in the packages in question were running in 10 to 20 seconds yet the packages were at times taking upwards of 20 minutes. Furthermore, I found that when called on their own, each package did not run much longer than its single data flow, yet when run as a child of another package (via an execute package task) the execution duration more than doubled. In one example I had a package that ran in 10 seconds on its own, 23 seconds as a child, 56 seconds as a child 3 levels deep, and almost 3 minutes when run as a child four levels deep. In that same example the Data Flow took only 7 seconds. So why was the package so slow when run as a child of one or more packages?

The logging mechanisms in place were stored procedures being called by Execute SQL tasks and were being passed things like a batch Id, Package Id, Source Name, Source GUID, Start Time, End Time, etc. Once I began profiling it was clear that there were way too many Pre and Post execute logging stored procedure calls.

Let me take a step back and explain the project/package design. The project contained about 50 SSIS packages, some of which were being called by Execute Package tasks within the project. For example, there was a Master package which called some staging packages and some staging packages that called lower level staging packages, and those in turn called some generic logging packages. There were as many as four packages in any given package execution hierarchy. In each package, regardless of where in the package hierarchy it fell, there were four event handlers:
Getting back to what I was seeing in Profiler (many calls to the Pre and Post execute logging stored procedures), it only made sense that the OnPreExecute and OnPostExecute event handlers were being fired each time the logging stored procedures were being called. So why would those event handlers fire so many times?

I started to research event handlers propagation to understand what happens in SSIS when we have package level event handlers and a package design in which packages call other packages. I quickly ran into Jamie Thomson’s “SSIS: Understanding event propagation” blog post. In his post he talks about three things:


Numbers 1 and 2 were what I was most interested in. Number 3 is something I’ve written about in the past in a blog post title “SSIS Foreach Loop Container: Continue on Error” when explaining how to continue a Foreach Loop container when a child task fails.

I took Jamie’s example and modified it to fit my situation which was a four package hierarchy with a single Control Flow task (empty script task just to get the event handler to fire) in the lowest level package and an OnPostExecute event handler in all packages. Instead of an empty Control Flow task in the parent packages, an Execute Package task was used to call the package one level down (e.g. Package_Level2 called Package_Level1, PacakageLevel3 called Package_Level2, etc.). Screen shots below depict the design.

When we execute Package_Level4 we see a total of 52 events fired, all triggered by the single Level1_EmptyControlFlowTask task in Package_Level1.
Below is the formula for determining how many additional events will be fired by the top-level package in a package hierarchy, per Control Flow task when there is a single OnPostExecute event handler task in all packages in the hierarchy.

As you can see, having nested packages with package level event handlers can create quite a bit of overhead. I initially failed to see this in my logs because my logging stored procedures were ignoring the event handlers that were fired by other event handlers. However, the process still had the overhead of all the events firing and the stored procedure calls, the data just wasn’t being persisted to the database.

Event handler behavior can be very tricky. Don’t be like me, understand what’s happening before implementing your event handler logic.
Posted by d.elish at 8:08 AM 2 comments: