There are number of tools available to build your SQL Azure database. In this post I will describe three of them including SSMS (SQL Server Management Studio), SSDT (SQL Server Data Tools), and the SQL Azure Database Manger.

While the SSMS 2012 user interface looks a bit different than previous versions because it is now hosted in the WPF-based Visual Studio shell, connecting to a database is the same as connecting from SSMS 2008 R2. 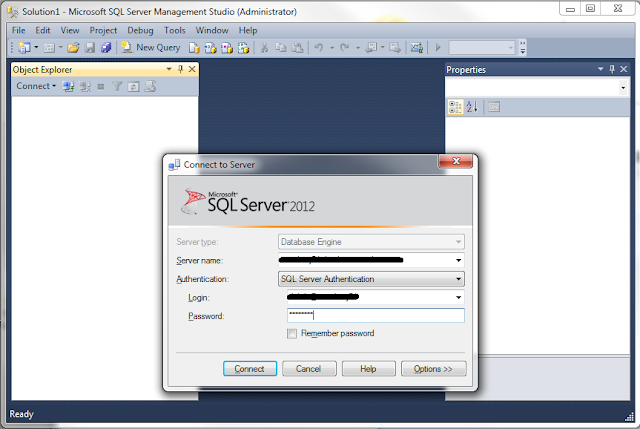 Once connected, the Object Explorer tree looks very similar to an on-premises SQL Server database, although you'll notice that the server icon looks a bit different. Additionally, some folders such as Server Objects and Replication as well as the SQL Server Agent node are missing as this functionality is not currently available on the SQL Azure platform. Refer to MSDN for a list of the SQL Server features not currently supported on the SQL Azure platform. 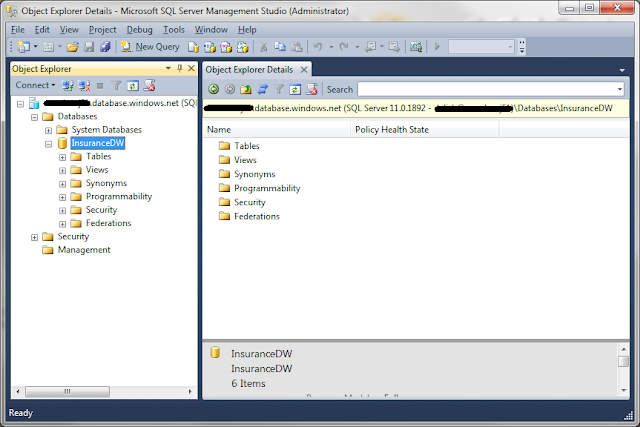 Now that we have provisioned a SQL Azure server instance as well as created a SQL Azure database, let's create a table. Just like a regular SQL Server database, it's as simple as expanding the database node in Object Explorer, right-clicking the Tables folder and selecting New Table.... For some reason Microsoft has chosen not to provide the familiar table designer user interface. Instead it displays a CREATE TABLE script template. Below is a screen shot of a modified template used to create a PolicyTransactionFact table in our InsuranceDW database. All we had to do was name the table and add columns and data types. Once you have created your table definition you can either hit the F5 key on your keyboard or click the Execute button. The screen shot below was taken after executing the CREATE TABLE script. 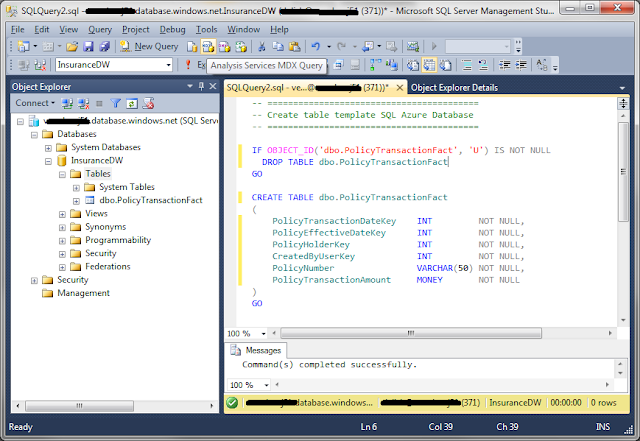 Creating other types of SQL Azure objects is just as easy and is extremely similar to creating objects in on on-premises SQL Server database.

Microsoft would like SSMS to remain as an Administrative tool for SQL Server instances and databases but would like development work to be done in Visual Studio by way of SQL Server Data Tools projects. Additionally, starting with SQL Server 2012, SSDT replaces BIDS as the development environment for SSIS, SSAS, and SSRS.

The first step in SSDT-based database development is to create a SQL Server Database Project. Make sure you install SSDT prior to attempting to create this project type as it is not available with the default installation of SQL Server 2010. 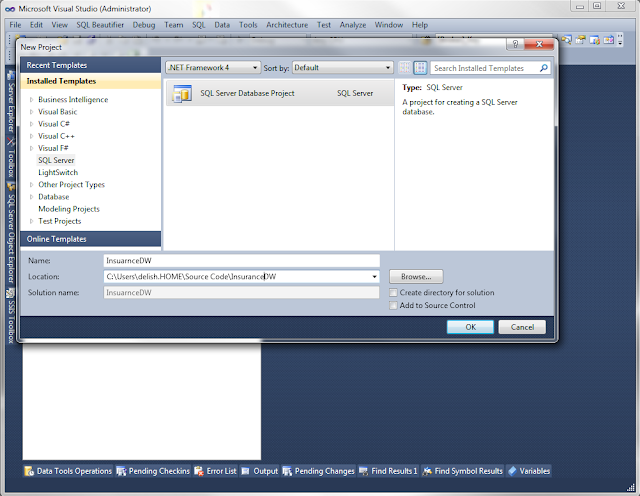 Once you've created the SQL Server Database Project right-click the top-level project node in Solution Explorer and select Properties. Here is were we set the Target Platform to SQL Azure to make sure that our build output is compatible with the SQL Azure platform. 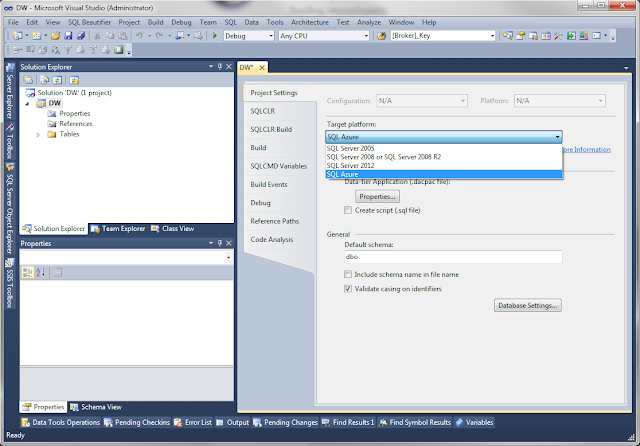 Once the project is created and the platform appropriately set we can begin to create database objects. Just as we did with SSMS, we'll create a table. As you can see below, SQL Server Database Projects provide a table designer so that you can create tables using a GUI as well as writing SQL. 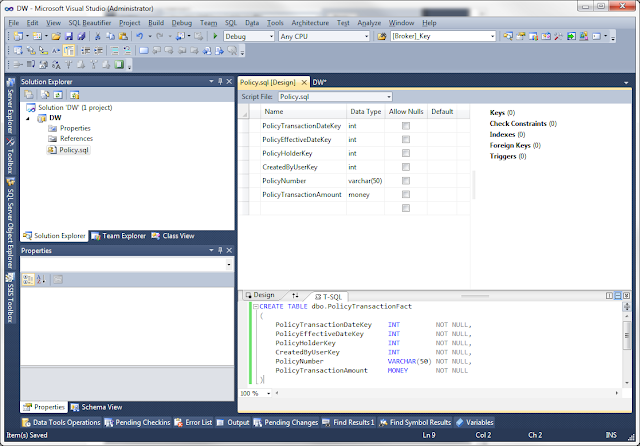 Since SSDT is a declarative development environment we don't actually create physical objects on a server as we develop them in code. Once the developer is content with their development they must Publish the current SSDT representation of the database schema to the database server. This is done by right-clicking on the top-level database project node and selecting Publish. 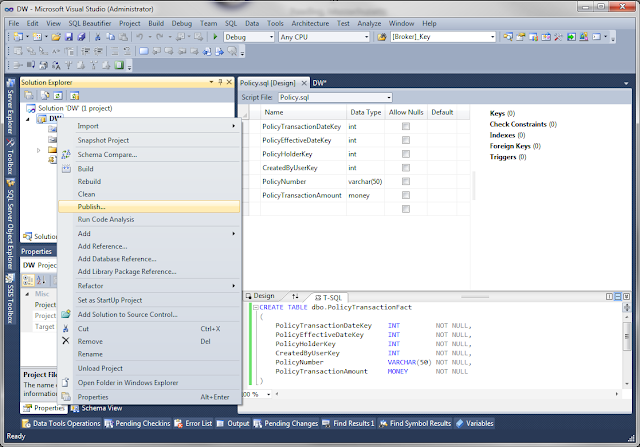 At this point we are presented with a dialog requesting the publishing/deployment information.

Once the connection information and database name are entered hit the Publish button. The results of the publish can be seen in the Data Tools Operations window. 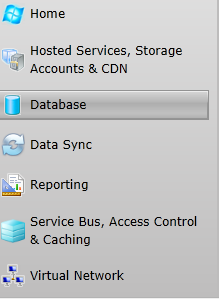 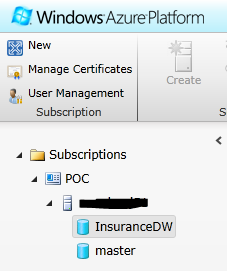 This will take you to the Database Manager log on screen. Enter your credentials and log on. You should see  the screen below. 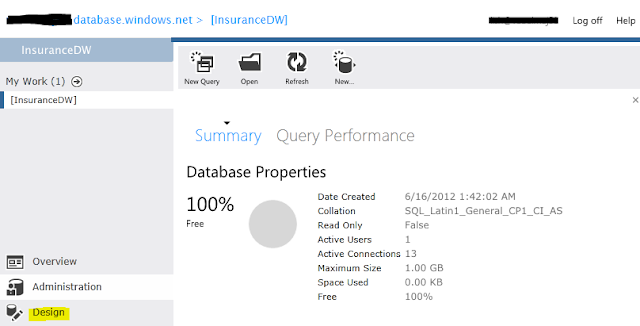 Click the "Design" link in the lower left-hand corner of the screen.

Notice that we're in the Tables section and that we see a list of our tables. Click "New Table" to create a new table. The Create Table screen should be self-explanatory. You can add/remove columns, set their data types, select primary key columns, set nullability, etc. When you're done, click "Save" and your new table will be added to the database.

Summary
As you've seen, anyone can create a SQL Azure database (whether you want to pay or not) and use any one of the three tools we discussed to create and maintain database objects. SQL Azure isn't right for everyone, but for some organizations and situations it can be a very powerful tool. Hopefully this post will at least convince you to get your feet wet in case you find yourself in one of these situations so that you will have had enough exposure to SQL Azure to know what to do next. Good luck!
Posted by d.elish at 3:38 PM