If you're in the unfortunate position that I recently found myself in and need to move data from a Visual FoxPro (VFP for the die-hards) database to a SQL Server database there are a few gotchas you might run into including: 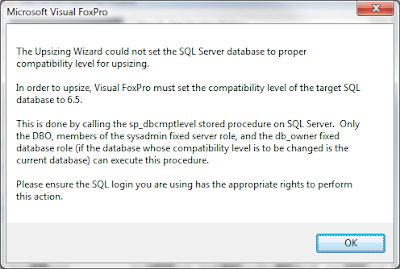 1. Creating a Visual FoxPro Database From Pre-existing .dbf Files
If you know anything about VFP then number 1 is probably a no brainer. When I started my project I knew absolutely nothing about VFP (and I still don't). So for those of you that are like me, it's very easy to create the .dbc file. Follow the steps below.

Anyway, the VFP Upsizing Wizard requires that the SQL Server that you're upsizing (importing) to be able to support compatibility level 65 (version 6.5). If you're running into this error you're most likely running SQL Server 2008 or above as these versions no longer support compatibility level 65 or 70 and 2012 no longer supports 80 (version 2000).

What is one to do? What I found was the easiest route was to download SQL Server 2005 Express Edition. It's free, it's a small download (~55mb), and it supports 6.5.

When creating your DSNs keep in mind that if you're running a 64-bit operating system you must use the 32-bit ODBC Data Source Administrator. THIS DOES NOT MEAN TYPING ODBCAD32.EXE IN THE RUN PROMPT. In order to launch the appropriate administrator you must run it from a directory similar to C:\Windows\SysWOW64\odbcad32.exe.

At this point you should be all set to run the Upsizing Wizard. Good luck!